The following image gives an example of an ARP request and response.

The ARP packet has the following format.

In the above image, we can see that there is a field Opcode. This field specifies the nature of the ARP messages being sent. In this blog post, we are mainly concerned with the sender’s and receiver’s source and destination address in the following two types of ARP messages.

The main issue of ARP lies in the fact that there is no authentication of the ARP reply, i.e., any host can send an ARP reply claiming to be the Target. There is no check done by ARP to verify if the host that has sent the ARP reply is whom it claims to be.

If host A wants to send data to host B on the same network, it will first resolve the hardware address using host B’s IP address, and then sends the data. If we send an ARP reply claiming to be host B, host A will update its cache with our Ethernet address. All subsequent messages are sent to us. If instead host A wants to send data to a host X, not on the same network, host A will send it to the default gateway which will then forward the message to the appropriate router. To intercept these messages, we need to send an ARP reply claiming to be the default gateway. Once we poison the target’s cache, we can either choose to forward the packets performing a man-in-the-middle attack (MITM) or drop them performing a denial of service attack.

Once we get the target’s MAC address, we can now poison its cache by sending a spoofed ARP response. The target might flush it’s ARP cache and send out an ARP request to the actual destination. To prevent it from overwriting our spoofed ARP cache entry, we must continuously keep sending it spoofed ARP responses. We can achieve this by using the function poison_arp_cache given below. The function poison_arp_cache must be looped until the attacker wants to stop the attack.

On trying the above function with the target as a Raspberry Pi 3B+ on the same network as my laptop, I got the following results.

Using the information we got from the get_default_gateway_details function, we can perform the MITM attack. All the above functions can be called from a single function perform_mitm which poisons both the target’s and default gateway’s ARP cache.

To allow packets from the target or the gateway to be forwarded, we must enable packet forwarding so that our system acts as a router. Whenever a packet not destined to our system arrives, the OS automatically forwards it to the appropriate host.

To enable this on Linux, we must do the following.

On windows, we must carry out the following steps.

On running the perform_mitm function, all communications between the gateway and the target now pass through my laptop. On sending a GET request to www.resonous.com from the Raspberry PI, we can see the same request in my laptop. 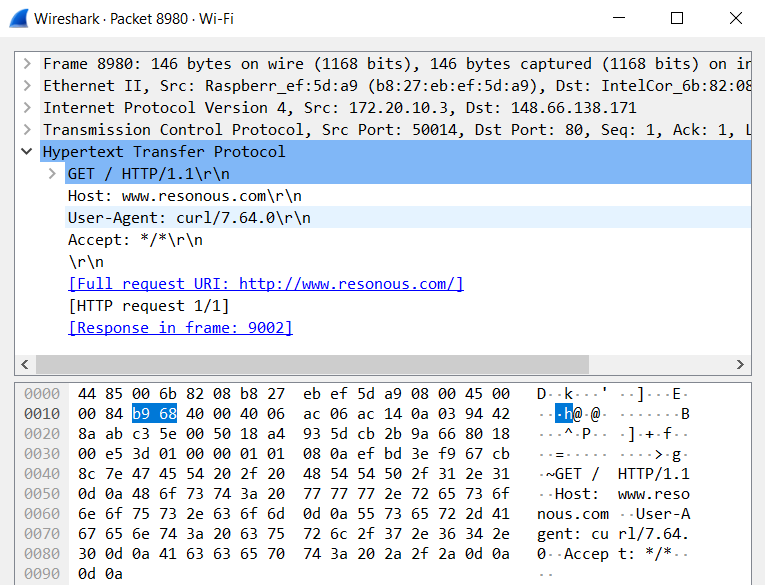 Since the GET request resulted in moved result, we can curl the website over https in the following manner.

The same can be seen in Wireshark.

That’s it for this post. The complete script is available at my GitHub page